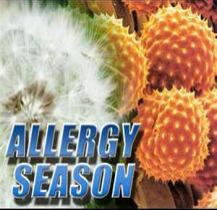 Most everybody knows about allergies or have experienced them directly, but most do not understand exactly what allergies are. Allergies are defined as a hypersensitive response of the immune system to a normally harmless substance. These substances are referred to as allergens. Some of the more common allergens are dust/dust mites, pollens, molds, mold spores and pet dander.

Allergies are the 6th leading cause of chronic disease in the U.S. and costs more than 18 billion annually. It is estimated that approximately 50 million Americans are affected by allergies, 35 million of those to airborne allergens. A nationwide survey found that 54.6% of U.S. citizens test positive to one or more allergens according to the Journal of Clinical Immunology 2005. From the same journal in 2008 they found that over 50% of homes had at least 6 detectable allergens.

Allergic responses can have varied intensity and often are defined as mild, moderate, or severe (anaphylaxis). Allergies can occur throughout the body and effect many different tissues and organs. Aside from airborne sources, people can react to foods, drugs, insect venom/bites, various substances that come in contact with the skin like latex, metals and many more.

IgE Antibodies are small proteins produced by certain white blood cells called plasma cells that make up part of your immune system. These proteins normally protect the body from foreign invading proteins or organisms. However, in someone who is allergic there is an overabundance of IgE antibodies.

To date the mechanism as to why some people are allergic and others are not completely understood. However, there are scientific clues to explain this phenomenon.

Hay Fever can be subdivided into two basic groups:

These allergies are just that, seasonal and are usually caused by molds, fungi, spores and pollens. The most common triggers are tree, grass and weed pollens.

Generally, wind pollinated plants produce the largest quantity of pollen and these pollens can travel up to 20 miles on a windy day. Brightly colored flowers that attract insects for pollination are generally not allergenic. Fruit trees such as citrus do not produce allergenic pollen, but the fragrance can be irritating to some people.

Mold spores are much smaller than most pollen spores and often are not as effectively filtered by the nose. They pass through the nasal mucosa more readily and can cause allergic responses with smaller concentrations of spores. The levels of mold spores generally increase with increased humidity or after periods of rain.

Molds are found especially with irrigated land, golf courses, near artificial lakes and near decaying vegetation. Many molds grow on grass and other plants and are called smuts and rusts. Pollen counts are usually higher in the morning or late in the day. Counts are also higher especially on a warm dry day.

Here in Arizona, we have a year-round growing season so there are different plants releasing pollens throughout most of the year. Generally, cold weather and frost reduces pollen counts. A good website to check on the local pollen levels is: www.pollen.com

Asthma is another major symptom of the body’s reaction to allergens. However, in this case the bronchioles are the main body tissues effected. The symptoms of asthma are: Wheezing, coughing especially at night, chest tightness, and shortness of breath. Symptoms can vary in intensity. Allergens and other factors will cause a constriction of the bronchioles and increased mucous production.

In Arizona, asthma attacks increase with exposure to air pollutants such as: particulates, nitrogen oxides, ozone, and sulfur dioxide. Often the pollutant levels increase during inversions during the fall and winter months. However, asthma will increase also with viral infections, emotional stress, or increased mold spore counts.

The rapid increase in asthma and allergic reactions may be explained by the “hygiene hypothesis”. Scientific evidence is showing that liberal use of antibiotics and overprotection from viral and bacterial exposure leads to improper immune system development. This causes leaky gut and effects certain parts of the immune system to become over-reactive.

Eczema is another allergic reaction, but it is confined primarily to the skin. It accounts for about 10 – 20 % of visits to dermatologists. It is characterized by itchy skin rashes that often become red and swollen. They later crack, weep, and scale over. It may also lead to thickening of the skin or increased pigmentation. Often these people complain of dry sensitive skin, and it is more common in children and infants. This would be considered a certain type of eczema and it is often associated with other allergic reactions but can occur by itself.

Usually, the outer layer of the skin called the epidermis will thin out and not provide an adequate barrier to the inner layer called the dermis. This thinned layer causes a loss of moisture leading to dry skin and will allow other compounds to penetrate more readily and elicit an allergic reaction.

Avoiding some of these triggers, using mild detergent/ soaps and drinking plenty of water are helpful. However, it is better to “strengthen” the skin and normalize the immune system.

We are going to confine our discussion to food allergies that are mediated by IgE antibodies and not by IgG antibodies or other food intolerance mechanisms. These reactions can occur within minutes or a few hours after the allergic substance. Symptoms can vary from an itchy mouth or throat, hives, vomiting, diarrhea, coughing to anaphylaxis, which is life threatening. Anaphylaxis needs to be treated rapidly with the appropriate medication.

The most common food allergies in children are: dairy, soybean, peanut, tree nuts, wheat and egg. In adults they are: peanuts, tree nuts, milk, shellfish, fish, sesame, fruits and vegetables.

The immune cells lining the mouth, throat and digestive tract become pre-sensitized by producing increases in IgE antibodies. These antibodies attach to mast and basophils cells which are part of the immune system. When the person eats this food again there is a rapid release of chemicals like histamine that propels the allergic reaction.

The common methods for IgE response is via skin or blood testing. Skin tests are the oldest and a very reliable test. Basically, a small amount of a suspected allergen is introduced along the surface of the skin by either a prick or scratch. The skin reaction is then measured by redness and amount of swelling.

Another test involves blood testing and is called enzyme linked immunosorbent assay (ELISA). This measures the binding of allergic antibodies to an allergen which results in color changes. The ELISA testing replaces the older RAST blood tests.

A very interesting and less expensive type of testing is also performed at our office. This involves testing samples of different allergens and measuring the nervous systems response to the potential allergen. A muscle will normally show good strength when resistance is applied. However, it will test “weak” due to changing neural response when in close contact by the allergen. This testing is rapid and reveals not just IgE mediated reactions, but many more.

WHAT CAN BE DONE TO HELP ALLERGIES?

The first is to identify what are the triggers to a particular allergic reaction. Is it airborne, did it come in contact with the skin or consumed in our food? Performing the proper testing is the first step. The next is to avoid these triggers by making changes to the diet, using proper air filters, cleaning, and removing allergens in your environment. These steps help reduce the immune system exposure and minimize its inflammatory response.

The classic medical treatments consist of antihistamines, decongestants, and immunotherapy (allergy shots). These methods do help with the symptoms. However, they do nothing to rebalance the hypersensitive immune system or assist the bodies removal of the excessive inflammation.

The first step is to prevent these allergens from penetrating through the walls of the nasal/sinus cavities, throat, bronchioles, skin, and lining of the digestive tract. Certain nutrients assist in strengthening these membranes. Some of these are: Vitamin A, C, E, bioflavonoids, fish oils, probiotics, and zinc.

The next step is to make sure the liver is capable of proper detoxification. There are numerous nutrients to improve the two major phases of detoxification. Some of them are: B vitamins, magnesium, milk thistle, artichoke, turmeric, dandelion root, burdock root, alpha lipoic acid, N-acetyl-L-Cysteine, grape seed extract, taurine, glutamine and many more.

The next step is to rebalance the immune system so that it is not stuck in “hyper” mode. Some good modulators are: Vitamin D, glutathione, and many other antioxidants such as green tea extract and resveratrol.

Proper applied kinesiological testing can reveal the nutrients needed to rebalance the membranes, liver, and immune system. This will reduce or even eliminate the allergic response.