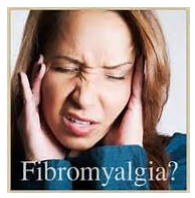 Most people have heard of fibromyalgia, but most patients and even other physicians do not understand this condition. For many years this was an unrecognized condition and most physicians simply thought this condition was completely psychosomatic. However, in 1990 The American College of Rheumatology finally gave physicians some criteria to determine if someone had fibromyalgia. This criteria was recently updated in 2010. Let me summarize this criteria:

You can obtain a copy of these surveys by going to: www.fibroknowledge.com/ downloads/2010_ACR_CRITE RIA..pdf. See how you perform! Please remember these surveys will strongly suggest you may have fibromyalgia, but will not totally confirm your diagnosis.

The most outstanding symptom associated with fibromyalgia is chronic widespread often bilateral pain. The pain is often described as a deep ache, flu-like in nature, it can be burning, shooting or like large stabbing needles. The pain can be elicited by things that normally should not elicit pain like a hug, bumping into a desk. This is best described as a hypersensitivity to pain. Often the pain in the muscle is accompanied by stiffness which oftentimes is worse in the morning.

The next major symptoms are chronic fatigue and sleep disturbances. The fatigue can hit suddenly and become overwhelming almost to the point of being incapable of doing anything. A patient may be able to fall asleep, but the sleep is non-restorative. Often times a patient will wake up frequently during the night. These abnormal sleep patterns lead to increased fatigue. This starts to become a vicious cycle.

Another major symptom is cognitive/brain dysfunction. Most with fibromyalgia suffer from memory loss, have problems with concentration, have difficulty speaking coherently, trying to remember words and having problems with tasks such as writing or typing. Sometimes these cognitive problems are called “fibro fog.”

Essentially, it appears that the brain, nervous system and musculoskeletal system seem to be primarily affected by fibromyalgia.

Although there are no specific risk factors for fibromyalgia there are certain things that increase the chances of having fibromyalgia. One big risk factor is being female and having a family history of fibromyalgia and/ or other arthritic diseases.

Prior significant emotional and or physical traumas may lead to fibromyalgia. In particular injuries to the cervical or neck region increases your risk. This is one of the reasons to encourage those in automobile or sports injuries to seek proper treatment immediately! Getting proper psychological counseling is equally important.

Women going through menopause have increased inflammatory compounds, cytokines and hormonal changes that increases the risk of fibromyalgia.

Chronic sleep disturbances, being overweight and poor physical conditioning can also increase your risk. Another factor is having an infectious disease which may shift the immune system in such a manner to cause increased inflammation.

The exact mechanisms of fibromyalgia are not fully understood and certainly there is not a single cause of this syndrome. Rather, there are several changes taking place in the brain, spinal cord, immune system and at the level of the muscle tissue that would better explain these groups of symptoms. We will outline some of the current research and thinking regarding fibromyalgia (FM).

Patients that have FM often have decreased number of capillaries and smaller blood vessels found in the muscle tissue. The capillaries themselves become thickened. These two changes are likely to reduce the muscle’s ability to receive proper levels of oxygen and other nutrients. It is also believed that the removal of muscular waste by products is reduced. Furthermore, the energy producing organelles inside the muscle called mitochondria seem to be dysfunctional and no longer produce adequate levels of energy for proper muscular activity. The combination of these factors probably leads to muscular pain, stiffness and weakness. This may explain why malic acid, magnesium, B complex, iron, alpha- lipoic acid and other compounds help with reducing fibromyalgia pain.

In patients with FM there appears to be a three fold increase in a compound called substance P. Substance P helps to regulate the conduction of pain nerve signals particularly at the level of the spinal cord and brain. Increased levels permit more neural signaling to be received by the brain. It has been found that capsaisin, derived from hot peppers, is capable of blocking some of these pain nerve signals when applied as a cream to the skin.

A phenomena known as central sanitization often occurs with FM patients. What this essential means is that the brain becomes more sensitive to pain nerve signals and often overreacts to other nerve inputs from other sensory nerve endings or organs. This is why light touch, noise, joint motion may cause pain or be more annoying to someone with FM versus a normal patient. The neurotransmitters such as norepinephrine, serotonin, glutamate and others are imbalanced in different parts of the thalamus, cortex, hypothalamus and other parts of the brain. Additionally there are distinctive changes in blood flow to various areas of the brain if you have FM.

Lastly, these areas of the brain that are responsible for nerve pain conduction and interpretation can be affected by fluctuations in , nerve growth factor, insulin-like growth factor 1(IGF-1), cortisol, estrogen, progesterone and testosterone. The immune system along with their chemical messengers called cytokines also have a huge affect on the function of these brain neurons. Things that increase certain cytokines will increase inflammation.

In 2007, the FDA approved Lyrica as the first recognized medication for FM. This medication was original used to control seizures and block pain from shingles, diabetes and general nerve pain. The exact mechanism is not understood, but it seems to “calm down” overexcited nerves in the brain.

The next medication to appear was Cymbalta (duloxetine). It appears that this medication blocks the reuptake of serotonin and norepinephrine in the brain. This medication was originally intended to treat depressive disorders, but was found to reduce nerve pain with FM, diabetes and other peripheral nerve pain. Savella is another similar medication as Cymbalta.

Other medications approved for fibromyalgia include antidepressants, muscle relaxers, non steroidal anti inflammatories (NSAIDs) and sleep medications like Ambien. However, like all medications they do not come without risk. The number of side effects can be huge and significant. I encourage patients to find this out for themselves and discuss this with their physician.

When balancing an FM patient there are no specific “magic pills” because every person with FM do not have identical causes or have multiple causes. One of the major things to consider is to reduce anything that would lead to immune system imbalance leading to inflammation. Being evaluated for food sensitivities via delayed food sensitivity blood test and kinesiological evaluation is essential. Eliminating all artificial sweeteners trans fats, reducing omega 6 fats, reducing sugar, eliminate monosodium glutamate (MSG), reduce alcohol and avoid the foods you are sensitive is necessary for most with FM. Sometimes just eliminating artificial sweeteners can have a significant effect.

Avoiding night shade plants can in some people with FM reduce pain significantly. Nightshades would be potatoes, tomatoes, peppers, paprika and eggplant. They contain a compound called solanines which can be very inflammatory and can cause cellular damage particularly to the mitochondria.

Exposure to heavy metals, other industrial chemicals may also cause problems with neural activity, cause mitochondrial problems and cause low level inflammation. It is believed that certain waste by products from different microorganisms and fungi may cause inflammation, neurotransmitter imbalances and cause damage to mitochondria.

Getting on a program of yoga, stretches and light exercises can be beneficial if you have FM. Also of importance is getting in some program of stress reduction and balancing your adrenal gland function.