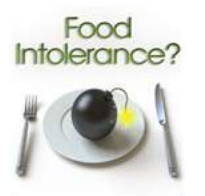 We wish to make a distinction here between food allergies and food sensitivities/ food intolerances. The last newsletter addressed “true” food allergies which are caused by a protein produced by a certain white blood cell in your immune system called a plasma cell. This protein is called immunoglobulin E or simply an IgE antibody. This is considered an allergic response since it involves an immune system response. However, it has been shown through more recent research that another immunoglobulin called IgG can also elicit an immune system response. It can also elicit many of the same type of symptoms as a regular food allergy but, generally the symptoms are not as severe and usually can occur from 24 to 120 hours after ingesting the suspected food. Whereas, an IgE mediated allergy takes minutes to a few hours to manifest symptoms. This makes it a little more difficult to pinpoint the offending food since there is a longer time period between ingestion and symptoms.

However, there is a great blood test that is available at our office that can be a good diagnostic tool to help indicate the offending food that elicits this delayed food sensitivity. This test actually measures IgG antibody response of your blood to different food antigens ( proteins that elicit immune responses). This test does measure the intensity of your response to the antigen. The test measures all the subclasses of the IgG antibodies so it is more accurate. Please note that this test is not 100% proof that you will have a reaction to a particular food. There is not complete agreement among immunologists and allergists about this test as a means of predicting an “allergic response”.

Here are some facts about IgG testing: There are elevated levels of IgG observed in individuals with certain specific allergic food sensitivities. Studies have shown that IgG mediated intolerance can cause a release of histamine, create immune complexes, cause cytotoxic cellular responses all resulting in inflammation when exposed to certain foods. Alison Mathery PhD in Immunology came to this conclusion, “At the present time the evidence suggests that the testing of food specific IgG by the reliable and reproducible ELISA technique may be of use as a diagnostic tool, that can be utilized to reduce or remove the adverse symptoms of many individuals who suffer from food sensitivities.”

James Braly, M.D. states that,” 70-80% of Americans currently suffering from chronic medical conditions of unknown cause who have proven poor response to conventional medical intervention, are suffering from IgG mediated delayed-onset food allergies.”

SYMPTOMS OF FOOD INTOLERANCE AND TILT

A 2008 report from The Center of Disease Control and Prevention estimated a 18% increase in food related allergic symptoms from 1997 to 2007. Here is a listing of potential symptoms as a result of food sensitivities:

TILT or Toxicant Induced Loss of Tolerance is a theory about chemical sensitivities proposed by Claudia Miller, MD at the Department of Family Practice at the University of Texas Health Science Center, San Antonio , TX.. The basic concept is that due to prior exposure to certain compounds acute or chronically (pesticides, solvents, foods, indoor contaminants, etc.) causes a breakdown in prior, natural tolerance and that it takes only a small amount of the offending substance to cause symptoms. In the 1999 journal, Toxicology and Industrial Health, they suspect that these substances stimulate certain sensory nerve endings which leads to the release of inflammatory mediators which causes various symptoms in the body.

This intolerance is due to a lack of an enzyme called lactase that normally breaks down a sugar in milk called lactose. When this sugar is not broken down it is fermented in the intestines and results in bloating, gas, cramping and sometimes diarrhea. It is rare to be genetically incapable of producing lactase. Generally, lactase is produced in infants but, gradually diminishes as we age. However, many people still retain the ability to produce lactase into adulthood.

To help with this intolerance it is best to avoid milk, whey and soft cheeses. Yogurt with active cultures might be tolerate, along with certain hard cheeses that are whey free. Probiotics and other compounds to repair the small intestinal lining are very important. In some cases using a lactase enzyme might help.

Histamine which is the chemical that causes itchiness, redness and swelling is derived by the breakdown of an amino acid called histidine. Improperly gutted fish and shellfish can result in high amounts of histamine production. The bacteria in the gut of the fish converts the histidine into histamine and this reaction is called scromboid food poisoning. There are also foods rich in histamine such as eggplant, spinach, ripening tomatoes, beer, wine, yeast extract, cheese and sauerkraut.

Normally the intestines and liver should break down tyramine. To help, eat onions, brussel sprouts, garlic, broccoli and there is a special broccoli sprout extract available at our office that helps.

Sulfites sensitivities occur in about 1% of the US population. Those that are at the greatest risk of reaction are asthmatics. The reaction usually results in an asthmatic attack, decreased blood pressure, dizziness, difficulty swallowing, flushing , hives, swelling, abdominal pain and even anaphylaxis.

In 1986 the FDA required to list sulfites if added to foods and have banned the use of sulfites on raw fruits, raw vegetables and salad bars. They are still permitted on certain snack foods, sweeteners, processed foods, certain dried foods, raw grapes and sliced raw potatoes.

So, it is probably best to eat fresh organic foods to avoid these products. Read your labels as well.

This group of food preservatives is found in thousands of processed foods. They can cause hives, swelling, asthma, nasal congestion and vasculitis. They are used to prevent spoilage by preventing bacterial or fungal growth. Benzoyl peroxide is used as a bleaching agent for white flour, white bread and some white Italian cheeses. Some foods naturally contain benzoates compounds. Some of these are cinnamon, cloves, nutmeg, prunes, black tea, and berries such as raspberry and cranberry.

These products are used in foods as preservatives, prevent the growth of bacteria, impart color and flavor to manufactured meat products. These products are known as sodium/potassium nitrate and sodium/potassium nitrite. They are often found in pepperoni, bacon, luncheon meats, smoked fish, ham, hot dogs, bologna, salami, and some imported cheeses. Some people develop headaches and other symptoms with nitrates.

However, we obtain most of our sodium/potassium nitrates from our other foods. Some of them are: spinach, beets, radishes, lettuce, celery, collards, turnip greens and eggplant. So , most of our consumption of nitrates is probably not from meat products as the amounts allowed is very low. More recent research has found that we have bacteria that break these products down and there is no longer a link between nitrates and cancer as previously thought. Often ascorbic acid is added to avoid nitrosamine production.

A LITTLE BIT ON GLUTEN AND OUR SUMMARY

Gluten is a mixture of about 80% protein and 20% carbohydrates, fats and minerals. Gluten is the gummy yellowish gray material left after washing wheat flour. Gluten is also found in barley, rye and to a lesser degree oats. Gluten is generally added to breads and other baked goods. This provides a nice spongy texture to many baked goods.

Gluten sensitivities are becoming much more common and there has been a significant rise in celiac disease. It is estimated that about 3 million Americans suffer from Celiac disease or about 1 out of 133 and about only 1 out of 4,700 is ever diagnosed. This statistic does not include those sensitive to gluten.

Gluten sensitivity and Celiac disease demonstrate a combination of immune system and other biochemical responses. A lot of the health concerns of Celiac goes way beyond merely the gastrointestinal symptoms and are actual body wide. We will dedicate a future newsletter to Celiac and gluten intolerance. FACTORS CONTRIBUTING TO FOOD INTOLERANCE: