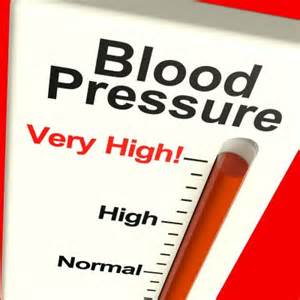 According to the American Heart Association in 2013 it is estimated that 77.9 million Americans or about 1 in 3 have elevated blood pressure. The Centers for Disease Control (CDC) in 2009 estimated as well about 31% of the US population has hypertension. Approximately 47% of those with hypertension have their blood pressure under “control”. It is interesting to note that under the age of 45 more men than women have hypertension, but over age 65  more women than men have hypertension. It is also more common in people of Afro- American descend than Caucasian or Hispanic backgrounds. What is further interesting is that hypertension levels in many non-industrial countries is significantly less than in the US.

Systolic pressure is that pressure generated primarily by the contraction of the heart. Diastolic is the pressure caused by the resistance or tone of the main blood vessels and “thickness” or viscosity of the blood.

Well you guessed it, one of the factors is uncontrolled stress. Here are some of the other major risk factors:

only true method for evaluat­ing for hypertension is to measure it.

Hypertension is very impor­tant as it causes many health problems. Here is a listing of some of the main complica­tions:

There are three basic compo­nents that effect blood pres­sure and many of the medica­tions prescribed address these components. The first, is the force and rate at which blood is pumped out of the heart. This initial wave of pressure is called systolic pressure This can be influenced by the strength of the heart/cardiac muscle, volume of blood forced out and the resistance of the main blood vessel ,the

aorta. Often when there is increased blood pressure the heart has to work harder and it will initially cause an enlarge­ment of the left ventricle of the heart.

crease in pressure. This is why atherosclerosis is a major con­tributor to hypertension.

Thirdly, as the total volume of blood and thickness/viscosity increase so does the blood pressure. It is more difficulty to pump blood through when it becomes more viscous. The amount of water, electrolytes/ minerals, protein content and number of red blood cells all effect blood pressure.

We will briefly discuss some of the major categories of medications to treat hyperten­sion. The first is diuretics. They are designed to cause the kidneys to excrete extra so­dium and water. This effec­tively reduces the blood vol­ume. Some commonly used diuretics are, hydrochlorothi­azide, Lasix, spironolactone and others.

The next category are beta blockers. They block the ef­fects of adrenalin and slow the

heart and reduce the tone of the arteries. Some examples are, atenolol, carvedilol, metoprolol and propranolol.

The next category are calcium channel blockers. They dialate the arteries and can decrease the force of contraction of the heart. Some examples are, amlodipine, Cardezim and verapamil.

The next group are called ACE inhibitors or Angiotensin Converting Enzyme inhibi­tors. Angiotensin can normally

The last major category are angiotensin 2 receptor block­ers or “ARBs”. They also di­late blood vessels. An exam­ple, is Losartan. Many of the above medications are com­bined together as well for proper therapeutic effect.

Hypertension is multifactorial, so a singular approach is often met with failure. This is why a combination of medications and lifestyle changes are so essential. We will discuss some of the factors involved with hypertension.

This is commonly known as plaque build up in the arteries. The plaque build up especially in the coronary arteries or blood vessels of the heart can decrease the delivery of blood to the heart causing it to not work properly. Atherosclerotic changes in the rest of the arter­ies decreases proper smooth flow of the blood and de­creases the diameter of the arteries and arterioles leading to increased blood pressure. As the plaques grow there is also decreased flexibility of the blood vessels which can increase blood pressure and result in some of the plaques rupturing causing clots or em­boli. Additionally, increasing

atherosclerosis significantly effects the kidneys, furthering hypertension. It an also lead to hemorrhaging of small blood vessel in the brain.

In our earlier newsletter, “Cholesterol”, we did discuss atherosclerosis and the impor­tance of reducing inflamma­tion especially in the blood vessels walls and balancing the proper levels of choles­terol, and other lipoproteins in the blood. Another important factor that accelerates and contributes to atherosclerosis is insulin resistance and diabe­tes.

There are a few non ­invasive tests that can be performed to give you an idea of the level of atherosclerosis such as, Doppler ultrasound imaging of the carotid arteries of the neck, measuring the Doppler wave­form of the peripheral arteries, and evaluating the retinal blood vessels in your eyes. There are more invasive tech­niques such as angiography

and electron beam computed tomography that can reveal your “calcium score”. The higher your score the more calcium is found in your coro­nary arteries and plaques.

A much better non­invasive method is to have a through blood test that contains not just your “good” and “bad” cholesterol, but one that breaks down the different sizes of the cholesterol and lipoproteins found in the blood and it is called a VAP test. Some inflammatory markers such as homocysteine, fibrino­gen, ferritin, free testosterone ( in men) and C­reactive pro­tein are also very important and are good predictors of atherosclerosis. A good test I recommend is called the Cardio­ION test from Genova Diagnostics. This panel is very comprehensive and is geared to assess cardiovascular risk.

So what can be done naturally for atherosclerosis, first stop smoking, exercise regularly.