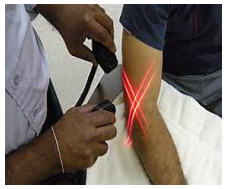 What exactly is a laser? Laser is actually an acronym for Light Amplification by Stimulated Emissions Radiation. Basically, a laser is a strong, coherent, narrow beam of light. It is used in the field of medicine/surgery, in many different industries and commonly now found in the many electronic devices like DVD players or bar code scanners.

What determines the usage of a laser is based on the power it generates and its wavelength. Most lasers for medical purposes are found within the visible light spectrum from 390- 700nm and this why certain lasers have a characteristic color. However, there are many other “medical lasers” that use ultraviolet or near infrared wavelengths. Many medical lasers are used in surgery and a common one you may be familiar with is called Lasix surgery.

So, what does cold level laser or low level laser mean? A cold level laser is a low powered laser that does not generate heat in the tissues. This is unlike more powerful medical lasers that cut and cauterize tissue. These lasers are much safer and do not produce heat, are non-ionizing ( producing free radicals) and do not damage tissue. The only possible contraindications would be those patients that have a pacemaker or other implanted electronic device. It appears to be safe with these patients, but no long term studies have been performed. So, it is best to proceed with caution. However, it is completely safe for patients that have joint implants/replacements or other surgical plates or screws.

The particular laser used at our clinic is a 635nm 5mW and manufactured by Erchonia. Both the company and lasers are ISO (International Organization for Standardization) approved. ISO approval indicates that the company and lasers manufactured have to abide by higher standards then other laser manufacturers without ISO approval. This company produces a reliable, quality product This was also the first and only low level laser approved by the FDA back in 2002. It is FDA approved for chronic neck, back, shoulder pain, carpal tunnel syndrome and they are looking at getting approval for fracture healing. Clinical trails indicate an average 40% reduction in healing time of fractures! In 2004, they received FDA approval for non-surgical laser liposuction. More on this in a future newsletter.

Many companies/clinics also advertise that they use low level laser, but in actuality they really use LEDs. These are called light emitting diodes. The LEDs do emit light, but it is not coherent, focused, and not of a singular wavelength. Therefore, they are not true lasers. The light from LEDs, depending on the wavelength band, can heat up the tissues and be therapeutic in certain musculoskeletal conditions. As we shall see the laser used at our office has some very unique characteristics and applications towards various health problems.

One the essential reasons that low level laser therapy (LLLT) works so well, has to do with the impact that laser photons have on the mitochondria. So, what are mitochondria? They are small wormlike organelles found inside all of our cells in our body. The mitochondria are also known as the “power house of the cell”. Without mitochondria we could not exist or function. These tiny organelles supply the cells with a unique compound called adenosine triphosphate or ATP. ATP is a compound that supplies energy to almost all functions of the cell. Without ATP our cells could not grow, repair, protect themselves, multiply, transport chemicals across cell membranes, produce chemicals, fats, carbohydrates and proteins in the cell, allow mechanical changes like muscle contraction, production of antibodies, neurotransmitters and on and on. These are essentially the energy packets of the cell that drive almost all of the chemical activity of the cell.

The laser is made up of light particles known as photons. Certain photons can have a stimulatory effect on the cell., causing the mitochondria to speed up there production of ATP. With more ATP the cells can function more efficiently and more rapidly.

So how can photons cause this change? It has been found that there is a protein in the mitochondria that responds to the photons and is considered to be a photon receptor, it is called cytochrome C oxidase. The photons also cause a change in shape of the mitochondria that improves their energy production and an overall increase in the number of mitochondria. The most effective wavelength to cause these cellular changes take place around 635nm. Lasers in the other wavelengths do not have the same unique ability to increase ATP effectively.

With the increased level of ATP, it can increase protein production in the cell and increase DNA synthesis for cell repair and cell reproduction. The laser also increases connective tissue repair by increasing an important compound found in tissue called collagen. The bottom line is that it will dramatically improve wound healing, and other tissue damage. Since the brain and nerves use a considerable amount of ATP as do the muscle the laser can have many potential benefits to these tissues. Some other benefits of laser are for acute/ chronic musculoskeletal pain, edema/swelling, inflamed oral tissues, skin and mucosal ulcerations, burns, dermatitis, autoimmune diseases, chronic inflammation, sports injuries, arthritis and many others.

Another relatively recent finding is that all living things produce and emit small amounts of photons of light. The human body emits visible light about 1000 times less than the human eye is capable of detecting. This has been measured at the Kobayashi labs in Japan. To remind you this is in the visible light spectrum and does not have anything to do with infrared heat emitted by the human body.

Fritz-Albert Popp in 1970 at the University of Marburg, Germany found the wavelength of these photons to be 200-800nm. In 1974 Dr. V.D. Kaznacheyev detected intercellular communication via biophotons. In 2006 James Oschmann PhD. In his article , “The Biological Basis of LLLT”, discusses in detail the production of biophotons and this is an additional means the body tissues/cells use to communicate with one another.

He finds that with the correct power and wavelength that a single photon from a laser can cause a single cell to emit several photons around it causing a chain reaction of other cells to produce biophotons. He found that the Arndt-Schultz law applies to LLT. Basically, the law states that a low dose can be stimulatory while a medium dosage can be inhibitory and high dose halt a reaction. I think of it as the theory of Goldilocks and the 3 bears. You need just the right laser to stimulate biophoton activity.

Another important aspect of laser influence on the human body can be explained by examining some human anatomy. To begin with all tissues are enveloped with connective tissue and is commonly known as fascia. In our example to the right, our muscles are encased in epimysium, subdivided into fassicles by perimysium and individual muscle fibers by endomysium. I use the example that your muscles are like oranges you have an outer rind (epimysium) it is subdivided into wedges (perimysium) and further divided within the wedges into single cells (endomysium). It should be noted that all organs, tissues and cells are organized in a similar fashion. Some examples are perineurium, pericardium and plantar fasia.

Another interesting anatomical finding is that each individual cell has protein fibers coming from its cell surface called integrins that intertwine with the collagen fibers and elastic fibers located outside the cell. Furthermore, the proteins in the cell membrane connects with an entire network of microtubules and other protein fibers throughout the cell including the nucleus where it may influence the genes and DNA. This network is called the cellular cytoskeleton.

Donald E. Ingber, M.D., PhD. Professor of Pathology at Harvard Medical School in the Annuals of Medicine in 2003, had some very interesting comments on cell structure. Let me paraphrase some of these findings:

The structure, shape of tissues from large to the microscopic cellular level effects the function of the body. This can imply that even vertebral misalignments may have profound influence on the body.

Another concept of body structure is called tensegrity. This is where all of our tissues are interconnected by connective tissue and a certain amount of tension is generated to give shape to the body. In the diagram below the structure is held together by tension generated by all the cables attached to the various poles. In the human body the poles would be our bones and the cables our connective tissue. Joel Goldthwaite M.D. summaries this concept of the body, “Anytime a structure departs from the balanced state, energy is wasted and efficiency is reduced. An imbalance can cause one part of the body to be strained more than another, but no one part can be strained without affecting the whole body.”

Another concept of the body is that it is a crystalline matrix. The body is about 60% water by weight and 25%of the dry weight of the body is collagen. Most of the water binds to collagen fibers. Collagen fibers along with some of the glycoproteins in the ground substance are semiconductors. Due to the semiconductor characteristics of these fibers it can conduct not only bioelectric activity, but also biophotons. So laser therapy can lead to structural changes and allow body wide communication among different tissues.

OTHER AFFECTS OF LASER

Another important finding is that laser light at 633nm increases some important natural occurring antioxidants. These antioxidants are superoxide dismutase (SOD), glutathione peroxidase, and catalase. The increase in these antioxidants decreases cellular damage, decreases inflammation and begins to allow faster tissue repair. Furthermore, the increase in SOD allows an increase in hydrogen peroxide which in the correct amounts kills bacteria. So, the laser is also bactericidal.

The laser also activates some of the white blood cells that make up the immune system. The process of enzyme production in these cells increases and the ability to engulf, bacteria, fungi and other organisms rapidly increases. So the laser improves immune responses.

The laser causes the release of a compound called nitric oxide. Nitric oxide in the correct amounts causes dilation of the blood vessels. So the laser improves circulation and blood supply to the tissues.

The laser will also increase protein production in the cell, improve cell division, increases tissue repair. So the laser increases healing from various injuries such as burns, bruises, strains/sprains, abrasions and currently being studied for fracture healing.

It should be noted the laser responses can be inhibited if someone is diabetic. Often patients that are deficient in zinc, selenium, copper or manganese do not respond as well. Patients with low levels of omega 3 fats also are poor responders to laser therapy.