Is SIBO Causing Your Health Issues? 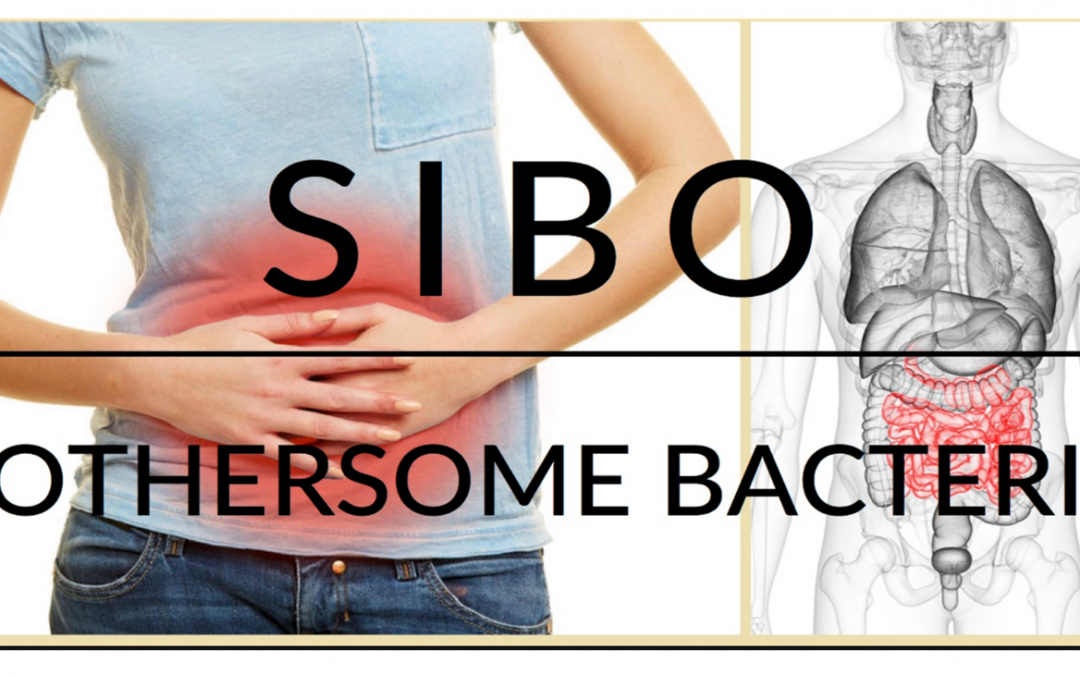 SIBO stands for small intestinal bacterial overgrowth. Simply put there is an excessive number of bacteria that are found in this part of your digestive tract that follows immediately after your stomach. The small intestine is a long narrow tube with many bends and coils and is compacted into your abdominal area. The small intestine consists of the duodenum, jejunum and ileum and the three sections average about 20-24 feet long and has the surface area the size of a tennis court!

Normally, the small intestine has a low bacterial count and it is the primary area for food and nutrient absorption. The problem comes in when there is excessive growth of bacteria that are normally found along the lining in the intestine and/or “unfriendly” bacteria. This overgrowth can cause a huge disruption to the function of the small intestine and as you will find out, in other parts of the body.

What are some of the symptoms of SIBO?

Traditionally SIBO shares many similar symptoms as IBS or irritable bowel syndrome and it is estimated that about 70-80% of people with IBS have SIBO.

The common symptoms are:

However, there are many more associated with SIBO such as:

How do you get SIBO?

It often can start after an episode of food poisoning and if not properly treated can have lingering effects months or years after the initial episode.

Other major causes are:

Some other conditions that can contribute to SIBO are:

To summarize, conditions that lead to an inflammatory process, damage the lining, and/or prevent proper motility to the intestines along with encouraging bacterial growth can lead to SIBO.

How does SIBO effect the human body?

So how can a few extra bacteria really effect my health, after all, there just bacteria right? Well… lets explore some of the reasons this is serious problem. To begin with the bacteria, have a high affinity for many nutrients in your food especially for, carbohydrates, sugars, fats, proteins, iron, vitamin A, D and vitamin B12. The bacteria will absorb these substances before the intestines can and essentially leads to “starving” your body.  This could lead to many nutritional deficiencies, fatigue, anemia and osteoporosis.

They also produce different waste by products that are very inflammatory. An example is lipopolysaccharides (LPS) which are derived from the outer lining of the bacteria. The LPS can pass through the damaged intestinal lining and lead to inflammation in other organ tissues. They also produce several organic acids that can also be irritating.

Other waste by products are two gases, hydrogen and methane. Only bacteria can produce these gases. These gases can lead to irritation to the lining of the intestines and bloating. The excessive production of hydrogen causes diarrhea and methane can lead to constipation.  They have found that a certain overgrowth of primitive bacteria called archaea leads to the release of methane. Methane has been found to cause a lot of muscle pain and stiffness as well!

Another interesting way the bacteria can influence the body is via hormones metabolism. The liver usually attaches excessive hormones such as estrogen to bile salts. The bile salt- hormone complex is then released into the intestines for eventual removal in the feces. This is the normal means by which the body helps to remove and balance various hormones. However, with SIBO many of these bacteria can split this complex and allow reabsorption of these hormones which is not good. This is a suspected means of causing breast cancer, endometriosis and other hormonal related issues.

There is a large nerve that is called the vagal nerve that influences the function of many of the internal organs such as the small intestine. What is important to note is that the vagal nerve is about 80% designed to carry important nerve signals from the intestines back to the brain and 20% from the brain to the intestines. Therefore, abnormal intestinal activity will affect many parts of the brain! This is considered part of the gut-brain connection.

Lastly, more recent research has found that many bacteria in the clostridia family produce different compounds that interfere with chemicals called neurotransmitters. Neurotransmitters help direct brain and nervous system activities. Specifically, these bacteria can cause imbalances in dopamine, norepinephrine and epinephrine. The research has indicated a huge connection with autism and other psychological issues. All from SIBO!

How to test for SIBO?

The small intestine is very difficult to directly evaluated as is not very accessible unlike the stomach (endoscopy) or the large intestine (colonoscopy). Some physicians may want to aspirate and culture a sample of fluid in the duodenum. However, you can only get at best a sample in the first 1-2 feet of the small intestine, but remember it is 20-24 feet long. This method is not a gold standard to detect SIBO and is fairly invasive. Stool analysis is not accurate either as this is more of a reflection of what is occurring bacterial wise in the large intestine.

One test that is much more accurate is the Lactulose Breath Test. The test is performed by swallowing a synthetic sugar that bacteria are only capable of breaking down. In about three hours you breath into a bag and seal it. The lab then measures how much hydrogen and methane is produced. Remember these are two gases specifically produced by bacteria not the human body.  This test is available at our office.

Another test that can be used is an organic acids test. You simply urinate into a container and seal it. There are several organic acids that are produced by bacteria and their levels are measured in the urine. Depending upon which and the relative levels this can give you a measure of bacterial overgrowth. This test is also available at our office.

How to treat and prevent SIBO

One of the methods to treat SIBO is to modify your diet. We always suggest getting off refined sugar as this is a prime food for bacteria and yeasts in the gut. Many patients may have to avoid certain foods rich in certain carbohydrates and a FODMAP diet is often recommended.

There are certain herbals and herbal mixtures that can reduce SIBO. Some examples are: goldenseal, Oregon grape root, goldenthread, coptis chinesis, barberry, thyme, sage, lemon balm and oregano. For elevated methane, an extract from garlic called allicin is good. The whole garlic may worsen symptoms as the carbohydrates in garlic may encourage further overgrowth. In some circumstances, we may have to refer a patient out for antibiotic treatment.

The small intestine does have a normal wave of muscular contraction controlled by the migrating motor complex. When this muscular activity is not functioning properly there are a group of compounds called prokinetics that might be of some help. Some examples are: ginger, certain probiotics, iberogast, motilpro and erythromycin.

Proper adrenal gland function has a big influence on the immune cells found in the lining of small intestine. These cells manufacture a very important antibody called secretory IgA. This antibody is often considered the first line of defense against bacteria, viruses, yeast/fungi, small parasites and food allergens. One could almost think of this as a protect coating along the intestine. To help with this proper adrenal function is required, proper levels of antioxidants and zinc.

In summary, SIBO is often ignored and not considered to be a major factor in digestive and/or other heal issues. Understanding the implications of SIBO gives one a better appreciation of having a healthy small intestine!