PCOS – The Most Common Hormone Disorder 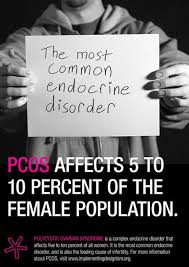 What exactly is PCOS? PCOS stands for polycystic ovarian syndrome. This imbalance can occur prior to puberty, during adolescence, from age 20- 50’s and into postmenopausal ages. So, this hormonal imbalance can occur throughout most of a women’s lifetime! Furthermore, the symptoms are not going to be the same for each patient and can express itself to varying degrees throughout her life. The singular common occurrence in all these patients are hormonal and blood sugar imbalances.

From a strict medical standpoint, PCOS effects women primarily in their reproductive years. It is estimated that 5- 10% of women in child bearing years (20-40) are diagnosed with PCOS. They often but not always have enlarged ovaries or ovaries with multiple cysts seen on ultrasound and have other symptoms such as irregular menstrual cycles, hormonal imbalances, infertility, depression, anxiety, skin/hair changes, weight problems and others.

This problem was first described in 1935 by two gynecologists that noted many of these patients did not release there eggs correctly and had multiple cysts on their ovaries. It should be noted that about 20-25% of “normal” women in the US show multiple ovarian cysts. It is estimated that about 30% of women have some PCOS symptoms, according to the National Women’s Health Information Center. It has been medically diagnosed in girls as young as 11 years old and is the most common cause of female infertility in the United States.

According to the US Department of Health and Human Services, that more than 50% of women with PCOS will develop diabetes or prediabetes (insulin resistance) by age 40. There is a 4 -7 times the risk of heart attack with those having PCOS and a greater likelihood of developing high blood pressure. PCOS patients also have elevated “bad” cholesterol and lower “good” cholesterol. They are also at a greater risk to develop endometrial/ uterine cancer. Another interesting fact, according to The American College of Obstetricians and Gynecologists, is that up to 80% of women diagnosed with PCOS are overweight or obese.

So what causes PCOS? At this point it is not totally known the precise cause. There appears to be a genetic link, as the likelihood of developing PCOS is much higher if you have a mother or sister with this condition. Hormonal imbalances leading to increased testosterone is very much linked with this and this increase in testosterone may be associated with a dysfunctioning enzyme in the ovaries and adrenal glands. The other main associated imbalance has to do with blood sugar imbalance or insulin resistance. Lastly, an inflammatory process brought on by a lack of antioxidants, excessive environmental toxins, poor diet, lack of exercise or mental/ emotional stress may be another important contributor to PCOS.

SYMPTOMS AND SIGNS OF PCOS

It should be noted that not all of these symptoms will occur in someone who has been diagnosed with PCOS and it should also be pointed out that many women share aspects of PCOS but may not have the “official label “ of PCOS. To obtain an official diagnosis you must have 2 of the 3 below:

With PCOS the normal balance of the hormones such as, insulin, cortisol, adrenalin, estrogens, testosterone and testosterone related hormones called androgens, are all out of balance. Insulin which is produced in the pancreas has a huge impact on the development of PCOS. Cortisol and adrenalin which are produced in the adrenals, usually in response to stress, also plays a crucial part in developing insulin resistance which is a main leading factor to PCOS. Estrogens, testosterone and androgens which are primarily produced in the ovaries and secondarily in the adrenal glands are the other group of hormones playing a key role in the development of PCOS. The adipose or fat tissue in your body also has the ability to manufacture estrogens and can also play a role in PCOS. Additionally, parts of the brain namely the limbic system, hypothalamus and pituitary gland also place an important and oftentimes overlooked role in PCOS. These areas of the brain receive and respond to various hormone levels in the blood and send their own hormone signals to the ovaries, adrenals and other glands in the body. In summary, there is a delicate balance that takes place between the brain, ovaries, pancreas, adrenals, fat tissue and various hormones that can lead to PCOS.

So let’s break down the key changes that lead to the symptoms of PCOS. Firstly, excessive mental stress, a diet high in refined sugars, lack of exercise can lead to increased cortisol and increased blood sugar levels. The increased blood sugar (glucose) levels inevitable lead to increased insulin levels. Insulin helps to place glucose into your cells and reduces blood sugar levels. However, the prolonged increased levels of insulin cause the ovaries to produce more “male” hormones or androgens. In the blood, increased insulin causes more testosterone to be available. The combination of these changes due to increased insulin leads to more androgens and testosterone in the PCOS patient. The increased “male” hormones prevent the proper formation of egg follicles in the ovaries which leads to the multiple cysts and possible infertility.

The increased androgen and testosterone levels also has an effect on the rest of the body.

These other symptoms of increased androgens would be the thinning hair, acne, oily skin, excessive hair growth and increased risk for cardiovascular disease.

The increased insulin levels over time can lead to insulin resistance. This is a condition in which the cells do not normally respond to insulin and this leads to chronically elevated blood sugar (glucose). The prolonged elevated glucose leads to increased weight gain especially around the waist, increased blood pressure, increased cholesterol and many other complications. This often can lead to diabetes and another set of health issues known as Metabolic Syndrome. My first newsletter details much more about insulin resistance and I would encourage you to read it. It is a very common health issue and it is not just particular to PCOS patients. The insulin resistance or lack of effective cell response to insulin is further aggravated with the increase in androgens. The increased androgens will cause a decreased uptake of glucose by the muscles and decreases the ability of the liver to breakdown and remove insulin. The net effect is increased insulin. So there now becomes a vicious cycle between elevated “male” hormones and insulin resistance. Furthermore, the increased androgens cause increased “fats” in the blood.

Another interesting hormonal imbalance also occurs with PCOS, increased estrogens. Now how does this occur if there is an increase in “male” hormones already, it seems they should neutralize one another, right? This is not that simple and no, they do not neutralize one another. So how and why does this occur? With the increased insulin and androgens this increases fatty tissue in the body and also there is an increase in free fatty acids in the blood stream. The fat or adipose tissue in your body does have the ability to manufacture many hormones such as androgens and estrogens. With the additional weight gain and other inflammatory changes that take place with PCOS the fat cells are stimulated to produce more estrogens such as estradiol and estrone. The fat cells will do this because there is an enzyme called aromatase that converts androgens into estrogens especially with increased inflammation. So now with PCOS we have increased cortisol, insulin, testosterone, and estrogens.

These hormonal changes begin to effect the neurotransmitters in the brain leading to anxiety and/or depression, it also leads to many inflammatory changes as well.

The most common treatment at first with PCOS is giving oral contraceptives. The hope is that the additional estrogen and progesterone will help balance the body. The additional hormones are to suppress the ovaries production of androgens and to effectively, “shut off” the brains ability to regulate hormones via two pituitary hormones called follicle stimulating hormone (FSH) and luteinizing hormone (LH). However, this really does not address the causative factors of the PCOS and often patients with elevated estrogens and poor liver function do not tolerate the oral contraceptives well.

The next most widely used medication is metformin. This is a diabetic medication and prevents the release of glucose and production of glucose from the liver. This decreases the levels of insulin. It appears to have low amounts of side effects, but can lead to a vitamin B12 deficiency. Sometimes progesterone alone is used, usually in the form of a cream for absorption through the skin. Progesterone in small amounts seems to decrease insulin production by the pancreas and may lower the androgens levels.

Spironolactone may be used to help reduce acne and excessive hair growth with people with PCOS. Finally, there are a number of infertility medications used as well such as Clomid.